– “…Soon with this new energy igniting the tourism industry, people will think of New Brunswick as the first stop on their east coast travels instead of as an afterthought. It is blessed with history, natural wonders, and scenic communities. Now, with fresh ideas and a generation of futurists, it will have soon the infrastructure to welcome the world”

The adventure along Canada’s East Coast concludes in New Brunswick. It’s the perfect place for those who want to discover a place through the people and the stories that they tell.

I first heard of covered bridges when Clint Eastwood and Meryl Streep starred in the movie, The Bridges of Madison County. While Madison County’s bridges are in Iowa, these charming structures can be found beyond the Midwest. In fact, the east coast province of New Brunswick has 58 of its own celebrated covered bridges that are waiting to be explored.

When doing a road trip through New Brunswick, one could spend weeks crisscrossing the province in search of the historic structures. We plan to cover a lot of ground so the rental car we booked allowed us the freedom to go off the beaten path.

Dating back to the 1800s, these heritage buildings known as the “kissing bridges”, have become a popular attraction for visitors to the province. Each one has a story to tell and each one is unique in its setting, size, and length. We make our base in Saint John and set out daily to see some of the more famous covered bridges in the nearby villages. While the bridges are a good excuse for a road trip, it is the small town scenery and the people of New Brunswick that make for a memorable experience. New Brunswick has a reputation for being welcoming and friendly. Strangers are treated like family and everyone is always quick to offer advice.

Our first stop is Saint Martins. Located directly on the Bay of Fundy, Saint Martins is one of the more visited villages in New Brunswick offering visitors the chance to walk inside its dramatic sea caves at low tide. The Saint Martin Sea Caves rival the Hopewell Rocks as one of the best places on the East Coast to witness the immense tides. The Bay of Fundy shifts up to 16 meters, (52 feet) creating a dramatic change along the coast twice daily. At high tide, the bay is filled with water flooding the caves. But when the water recedes the ocean floor is exposed and the huge caverns open up welcoming visitors to explore deep in their chamber. 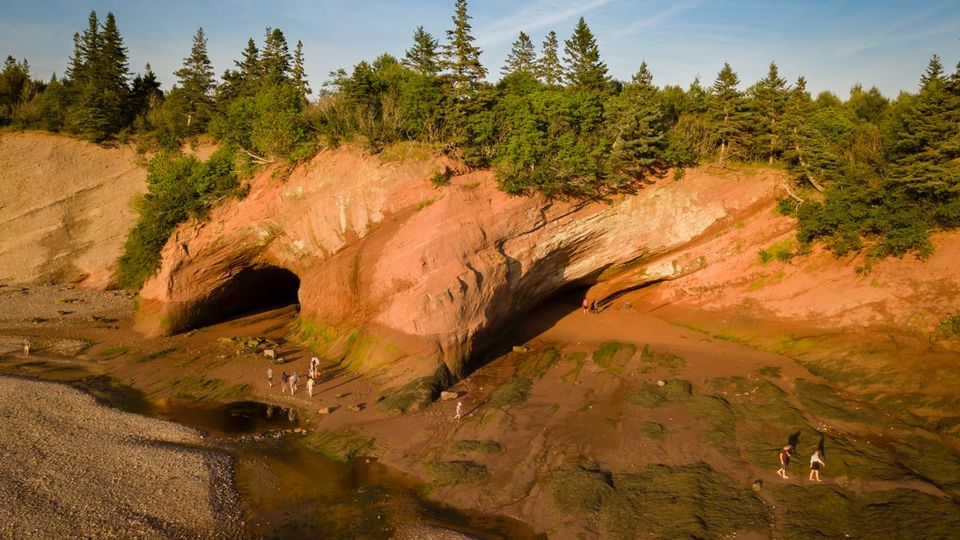 The Saint Martin Sea Caves open up welcoming visitors to explore deep in their chamber.

The village itself is fast becoming a popular tourist attraction. Once and important shipbuilding center, Saint Martins is now the gateway to the Fundy Trail, one of the longest undeveloped stretches of wilderness coastline in all of North America. People can make a base in Saint Martin to explore the trail by car where there are many hiking trails, waterfalls and beaches to discover. This delightful seaside community is a photographer’s dream with colorful houses, a rainbow of fishing boat boats moored at the dock, and cozy cottages for rent along the coast.

Saint Martins’ has not one but two covered bridges and a lighthouse all clustered together in a lovely park. We arrive at sunrise to see the town at low tide. Fishing boats tied to the dock marooned on the dry channel make for the quintessential East Coast scene. Sunrise is a beautiful time to be in Saint Martins. The bus tours have yet to arrive as eagles and seabirds wake up early to catch their morning prey. The two covered bridges stand proud, side by side free from traffic and we walk through the park alone admiring their classic beauty. We can’t wait to find more, so we hop in our SUV in search of other bridges. This route takes us out to Sussex where we will slowly work our way back to Saint John. 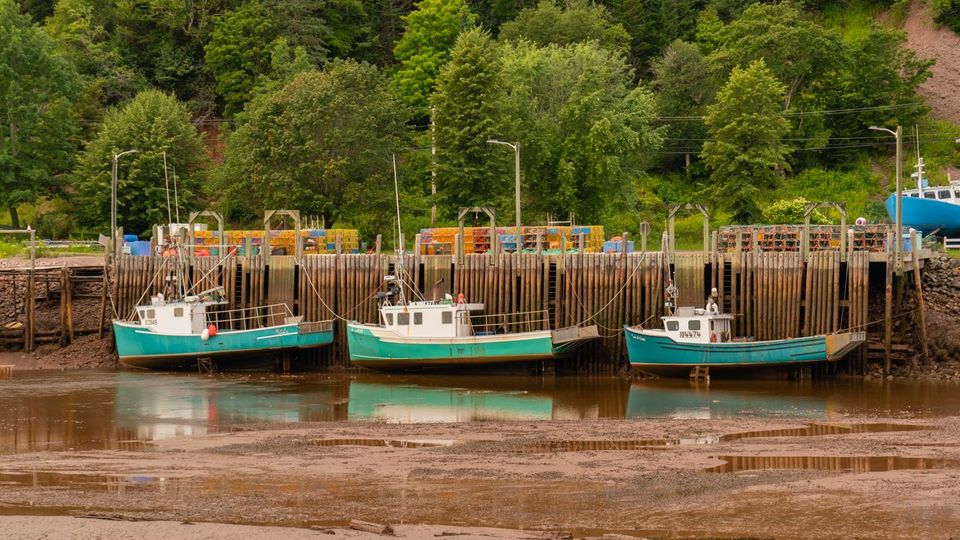 A rainbow of fishing boat boats moored at the dock.

Dating back to 1786, Sussex is known for its loyalist history. Loyalists were the early settlers of the area who fled the United States after the American Revolution. Today Sussex is a popular stop as it is a junction between Fundy National Park and the route to the historic town of Saint Andrews. We discover the Plumsweep Covered Bridge just outside of Sussex and are relieved to see it up and running. A car accident nearly destroyed the historic bridge in 2017, but it has been fully repaired. At one time, New Brunswick had 340 covered bridges but that number is dwindling. Each year as the elements, collisions and erosion eat away at the landmarks, residents hold their breath to see if they will be preserved. Lucky for Sussex this one is alive and well.

Heading south on Highway 1 we happen upon another hidden gem, the town of Hampton. We were in search of Darling Island bridge but never managed to find it. Instead of finding a bridge, we stumbled upon a pleasant town for lunch. The town of Hampton is located on the Trans Canada Trail, the longest recreational trail in the world connecting Canada from coast to coast. With nature in its backyard, there are plenty of hiking and outdoor adventures to be had. Kayaking is a popular excursion on the Kennebecasis River and there are six intact covered bridges nearby.

Moving on to the suburban retreat of Rothesay we expect to see a bay filled with ice fishing huts as it has the largest ice-fishing village in all New Brunswick. It turns out we’re a bit early in the season but we did see one man standing on some very thin ice fishing as we photographed the picturesque Renforth Lighthouse. You’ve got to love the hearty East Coast people. Lighthouses are a large part of East Coast communities. New Brunswick was built on a fishing culture and many towns and villages have lighthouses still in operation. 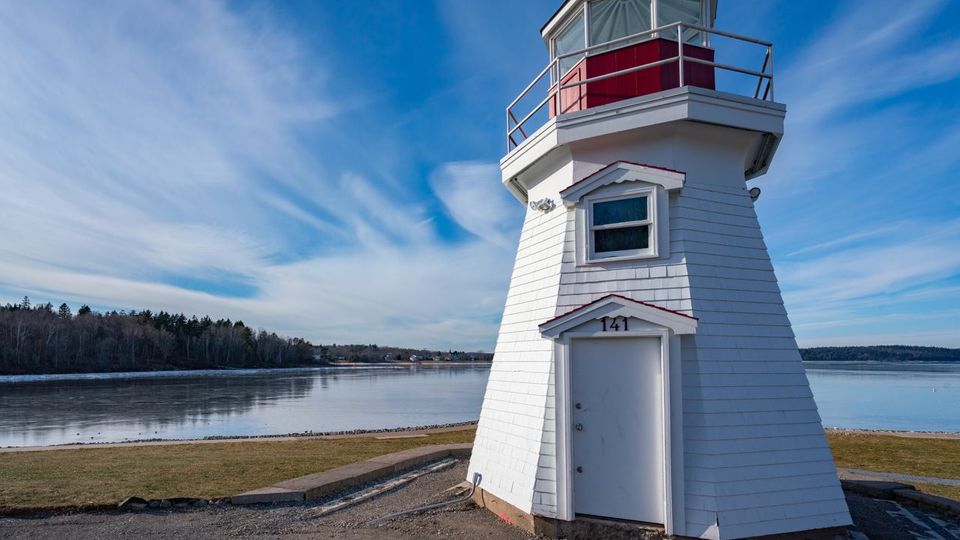 Lighthouses are a large part of East Coast communities.

Relaxing for the evening in Saint John, locals are excited to give us information on nearby bridges and not to miss villages. Local historian Harold E. Wright tells us of how the Saint John area was booming in the 1890s being Canada’s Winter Port with a busy CP Rail Terminal downtown. It attracted visitors from across Canada and around the world. With a new generation of travelers emerging in Saint John, the surrounding villages are motivated to attract new visitors. As Wright says, “The younger generation has a spirit, they are excited about the future and motivated to move forward.” New Brunswick may still be economically troubled, but soon with this new energy igniting the tourism industry, people will think of New Brunswick as the first stop on their east coast travels instead of as an afterthought. It is blessed with history, natural wonders, and scenic communities. Now, with fresh ideas and a generation of futurists, it will have soon the infrastructure to welcome the world. After some hearty conversations and a lobster and seafood feast, we make a plan for the following day to explore more villages and discover more lesser-known locations.

Up next! The world’s longest covered bridge in Hartland.

The snow falls harder as we make our way inland and we are grateful for our SUV car rental. Our front wheel drive compact would never have made it through the snow. When renting a car, we love getting the deluxe package with all the perks. Heated seats keep us warm and the all-wheel drive keeps us safe. It is worth the drive to Hartland when we stumble upon a long narrow bridge spanning a frozen river. The winter scene makes for dramatic views; even if Hartland is a ghost land. The bridge is closed for repairs and the souvenir shops and eateries are closed for the season, but we have it all to ourselves and we wouldn’t have it any other way. The bright winter sun lights up the historic bridge spanning a river of ice. We take a walk along the path and embrace the snow. Too many people shy away from cold but this is the most beautiful time of the year. It’s quiet and calm save for the sound of shifting ice in front of our eyes. 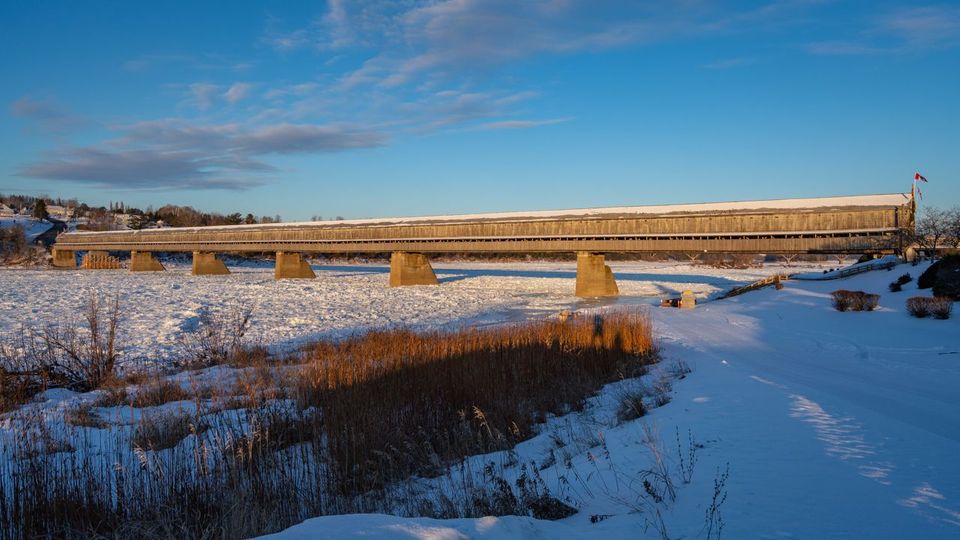 We drive to the United States border as we meander back towards Saint John and say hello to Saint Stephen. Saint Stephen is Canada’s chocolate town housing the country’s oldest candy company, Ganong Bros. Ltd and it is the first thing you see when crossing from the US. The drive from Saint Stephen to Saint John is filled with covered bridges, quaint fishing villages and splendid coastal views. The most famous of them all is Saint Andrews, a national historic district and a popular spot for whale watching. With fine dining and luxury accommodation, it is a destination unto itself. If you have the time, we suggest staying overnight at the Algonquin Resort so you can enjoy the galleries, museums and activities to the fullest. Be sure to walk along Water Street. The main street has been the heart and soul of the community for more than 200 years with many of the original buildings still standing. 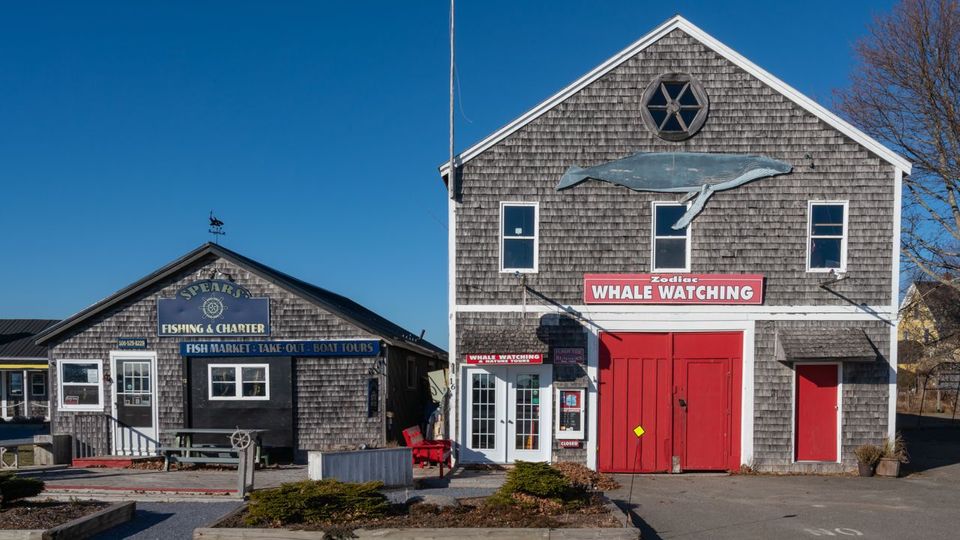 Our final stop before making our way back to Saint John is Saint George. Here you can also do whale watching, hiking and fishing tours. Fishing has been a part of the East Coast economy since it was settled and the traditions are still strong today. Covered bridges crisscross the Saint George Gorge and we make a point to stop at the mill and waterfalls. It is such a popular place for photographs, there is a spot cut out along the bridge for people to duck out of the away from traffic. Meandering back to Saint John, we stop at New River Beach and marvel at its pristine setting. We can only imagine how busy this gets during the summer, but today we are alone and we go for our own private walk on the beach grateful for the opportunity to explore a different side of New Brunswick. 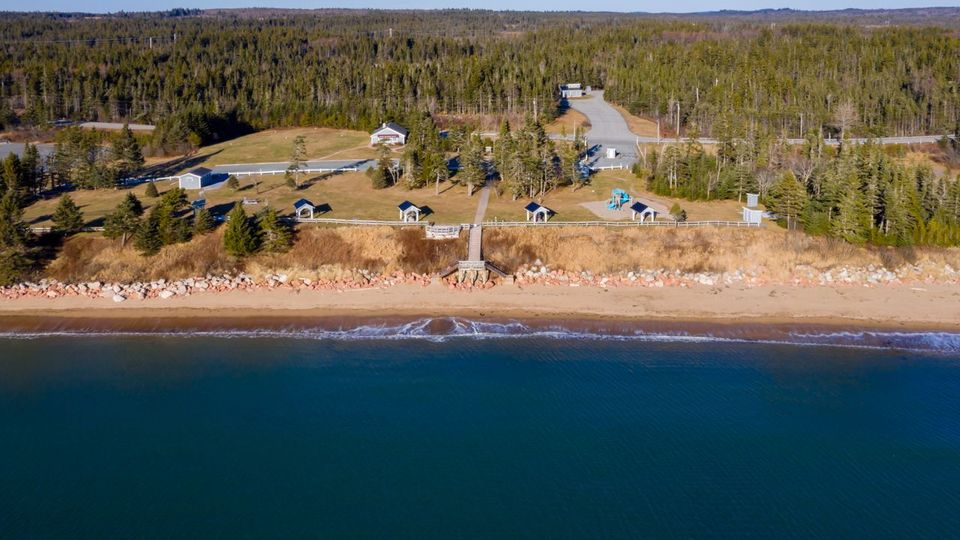 Canada’s East Coast grabs hold of your heart; from its warm and genuine residents to the charm of the small towns that dot the coastline. New Brunswick is the perfect place for those who want to discover a place – not through its bustling cities and nightlife, but through the people you meet, and the stories they tell. For the curious who want to know more about the history of the towns that helped shaped the nation and continue to embrace traditions of the past, this is the road trip for you. 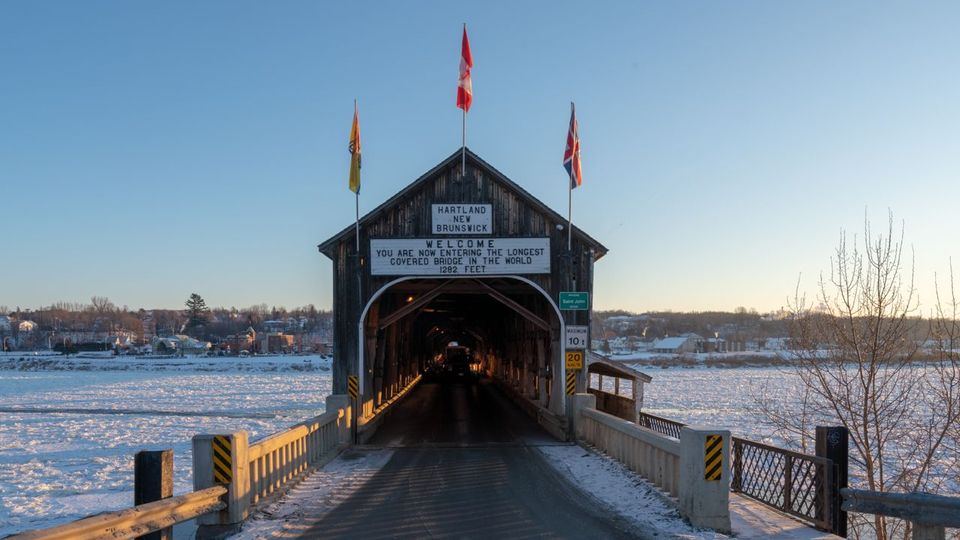 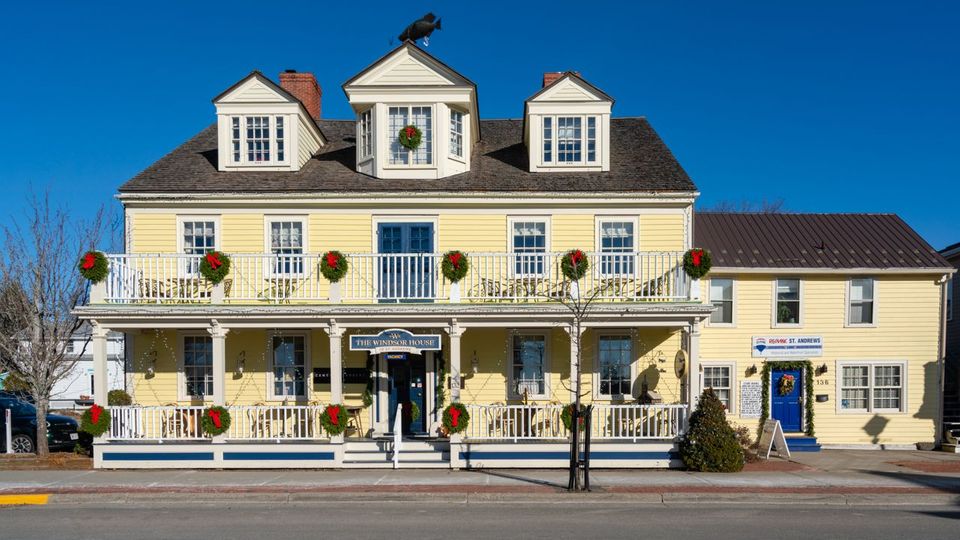 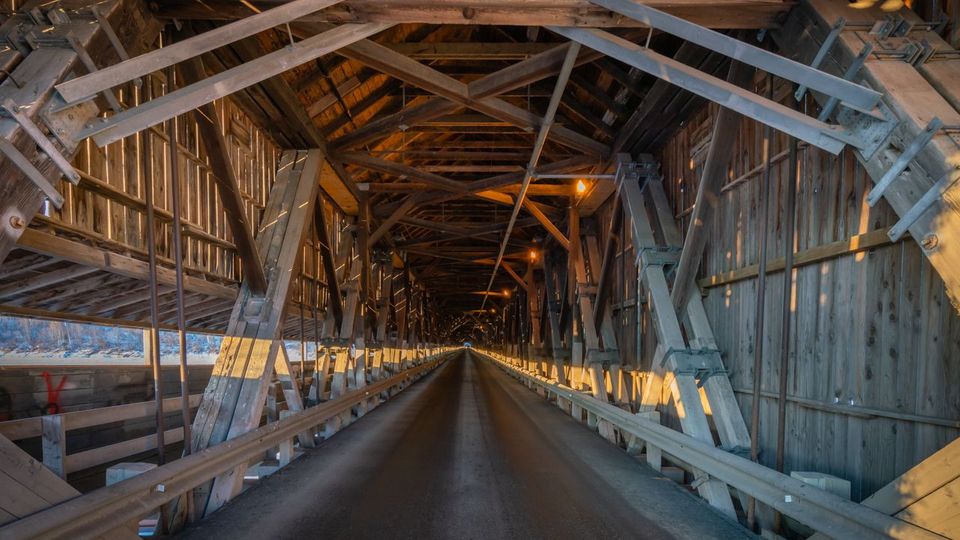 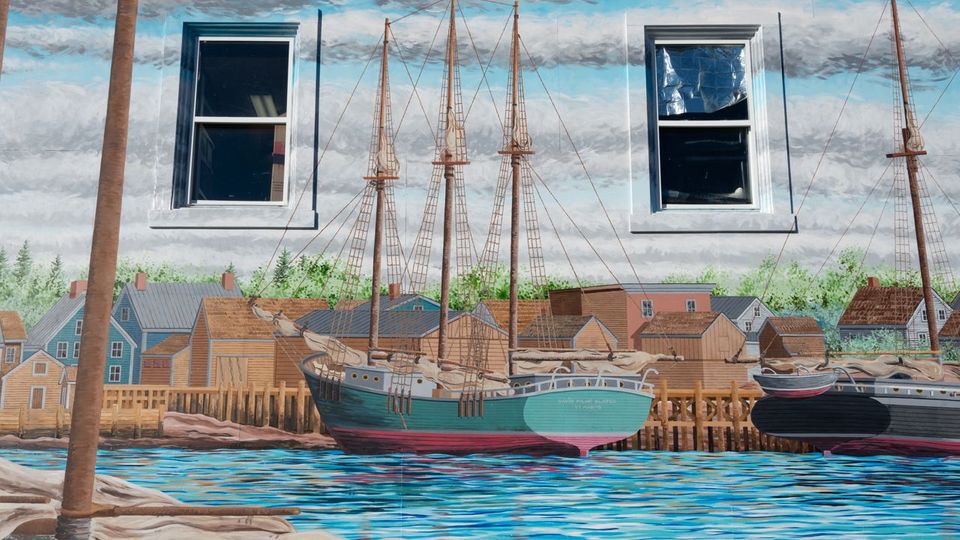 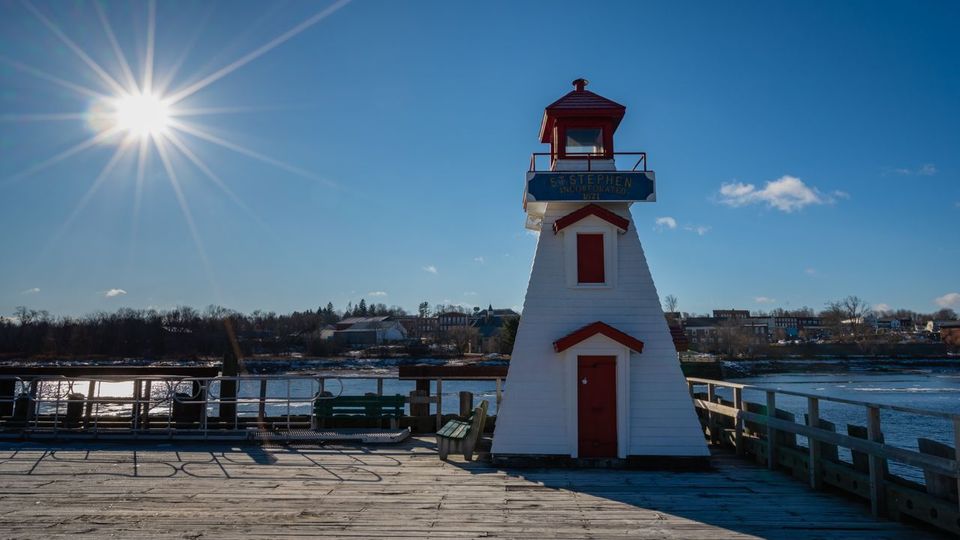 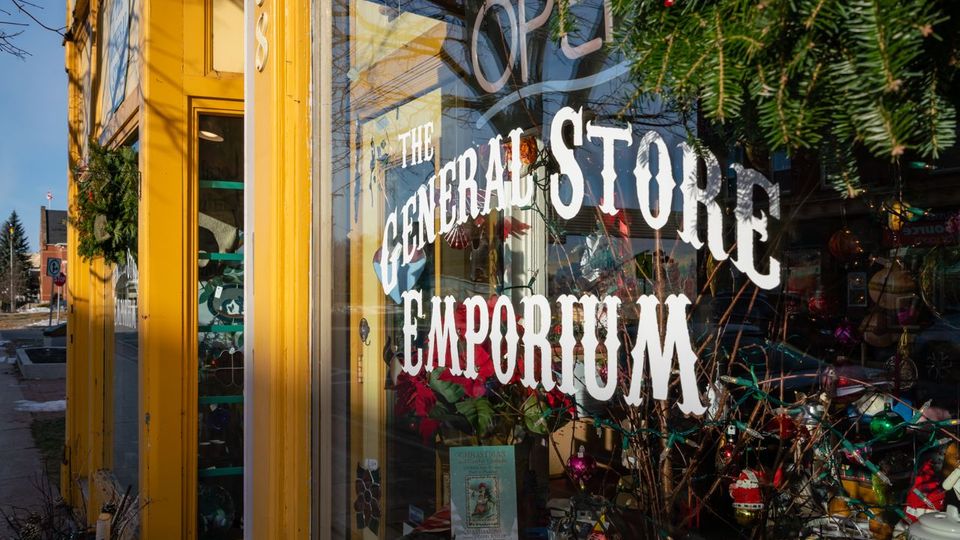 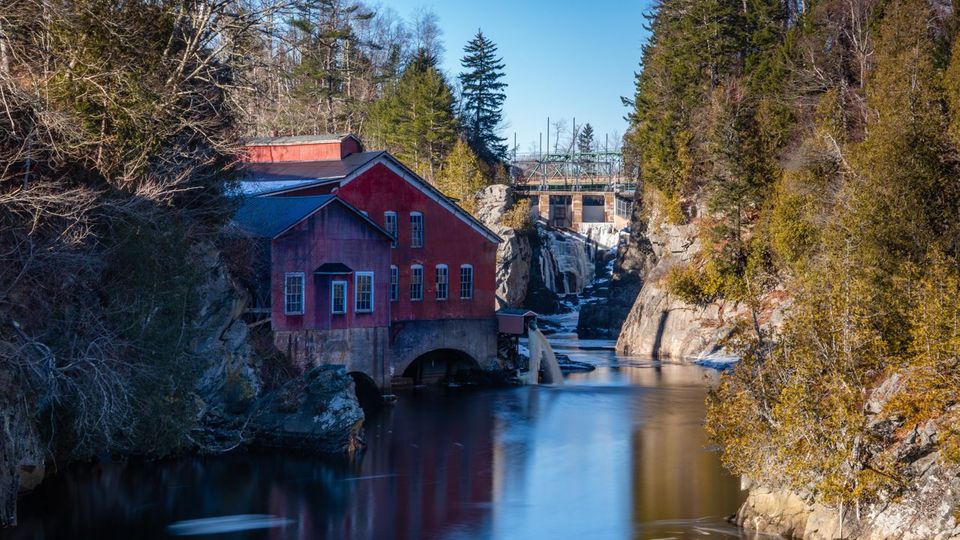 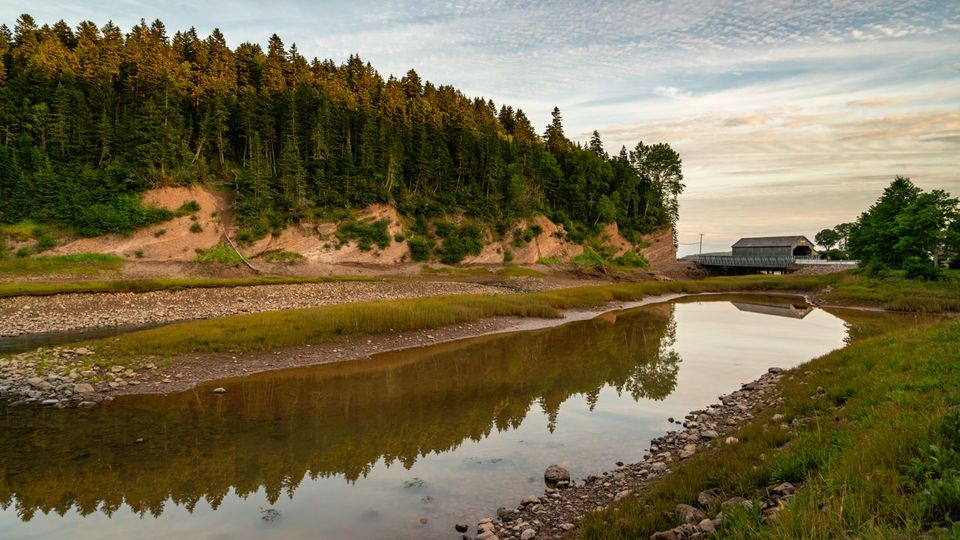